In a major upset, Anthony Hopkins was honored as best actor for “The Father,” beating out the late Chadwick Boseman (“Ma Rainey’s Black Bottom”), who was the favorite going into the night. Frances McDormand was named best actress for “Nomadland.”

“Bro, we out here!” Kaluuya shouted in joy before changing gears and crediting Hampton (“what a man, what a man”) and ending with the cri de coeur, “When they played divide and conquer, we say unite and ascend.”

The supporting actress award went to Yuh-Jung Youn for playing a comically cantankerous grandmother in “Minari.” She was the first Korean performer to win an acting Oscar, and only the second Asian woman; the first was Miyoshi Umeki, a Japanese-born American actress who was recognized in 1958 for playing a bride who encounters racism in “Sayonara.”

“I’m luckier than you,” Youn said to Glenn Close, a supporting actress nominee, to laughter. (Peter O’Toole and Close now jointly hold the record for most nominations in the acting categories without a win — eight apiece.) 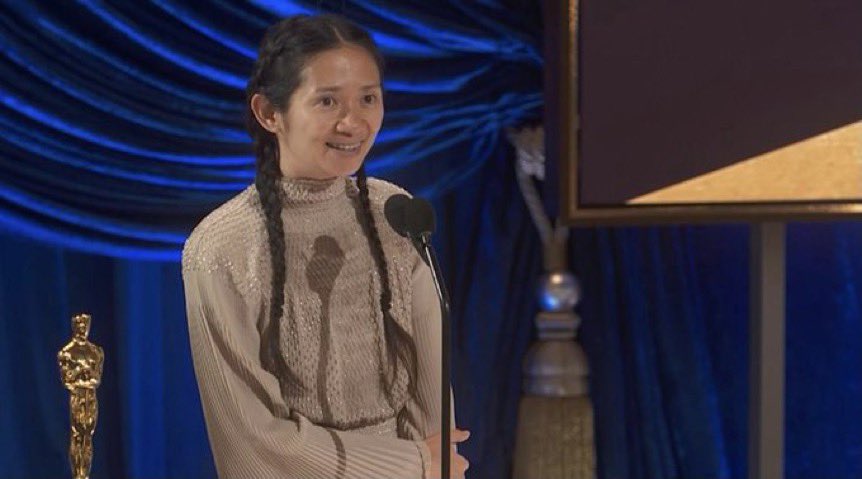 In other firsts, Mia Neal and Jamika Wilson became the first Black women to win the makeup and hairstyling Oscar, a prize they shared with Sergio Lopez-Rivera for their work on “Ma Rainey’s Black Bottom.” Ann Roth won for her “Ma Rainey” costume design, becoming, at 89, the oldest woman ever to win an Oscar.

Zhao won best director for “Nomadland,” a bittersweet meditation on grief and the damaged American dream. Zhao, who is Chinese, became only the second woman, and the first woman of color, to win the award. (Kathryn Bigelow was celebrated in 2010 for directing “The Hurt Locker.”)

“I’ve been thinking a lot lately of how I keep going when things get hard,” she said in her acceptance speech, referring to a Chinese poem she used to read with her father that began with the phrase “People at birth are entirely good.”

(Emerald Fennell was also nominated for “Promising Young Woman,” making this the first time two women had been nominated.)

“Soul,” the Pixar film about a Black musician stuck between Earth and the afterlife, added to the celebration of diversity, winning best animated film and score.

People of color were nominated for all four acting awards — an indication that the film industry has implemented meaningful reforms.

The academy, which has roughly 10,000 members, remains overwhelmingly white and male, but the organization invited more women and people of color into its ranks following the intense #OscarsSoWhite protests in 2015 and 2016, when the acting nominees were all white. This year, nine of the 20 acting nominations went to people of color.

The ceremony got underway on Sunday with Regina King, a former Oscar winner and the director of “One Night in Miami,” strutting into a supper-club set. It harkened back to Hollywood’s earliest days, when the Academy Awards were held in supper clubs — laid-back, insider events without the pressure of worrying about whether the television masses might find them compelling.

“It has been quite a year, and we are still smack dab in the middle of it,” she said solemnly, referencing the pandemic and the guilty verdict in the George Floyd murder trial. “Our love of movies helped to get us through.”

With very little additional preamble — signaling a low-key, stripped-down-to-the-essentials ceremony, the snoozy opposite of the typical pomp and circumstance — Oscar statuettes began to get handed out. Fennell, a first-time nominee, won best original screenplay for “Promising Young Woman,” a startling revenge drama. The last woman to win solo in the category had been Diablo Cody (“Juno”) in 2007.

“He’s so heavy and so cold,” Fennell said about her little gold-plated man in an impromptu speech that revisited one she wrote when she was 10 and loved Zack Morris in the television series “Saved By the Bell.”

It was one of the few lighthearted moments in a telecast notable for marathon acceptance speeches. (Play-off music seemed not to exist.)

Christopher Hampton and Florian Zeller won the adapted screenplay prize for “The Father,” about the ravages of dementia. “Another Round,” about middle-age men who decide to get drunk daily, won the Academy Award for international feature film (previously referred to as foreign-language film). Danish filmmaker Thomas Vinterberg dedicated “Another Round” to his daughter, Ida, who was killed in a car crash in 2019.

Hollywood wanted the producers of the telecast to pull off an almost-impossible hat trick. First and foremost, they were asked to design a show that prevented the TV ratings from plunging to an alarming low — while celebrating movies that, for the most part, have not connected widely with audiences. The producing team, which included Oscar-winning filmmaker Steven Soderbergh (“Traffic”), also hope to use the telecast to jump-start theatergoing, no small task when most of the world has been out of the box office habit for more than a year. Lastly, the producers needed to integrate live camera feeds from more than 20 locations to comply with coronavirus safety restrictions.

The Academy of Motion Picture Arts and Sciences had delayed the event, which typically takes place in February, in hopes of outrunning the pandemic. Still, the red carpet had to be radically downsized and the extravagant parties canceled.

Netflix received its first Oscar nomination in 2014 for “The Square,” a feature documentary about the Egyptian revolution. Since then — in large part because of copious amounts of money spent on awards campaigns — the streaming giant has come to dominate the nominations. It amassed 36 this year, more than any other company, with “Mank” receiving 10, more than any other film.

Netflix did win seven statuettes, including for documentary feature (“My Octopus Teacher”), hair/makeup and costume (“Ma Rainey’s Black Bottom”), animated short (“If Anything Happens, I Love You”) and live action short (“Two Distant Strangers”). It also picked up two for the little-seen “Mank,” landing Oscars for production design and cinematography.

But Netflix and its sharp-elbowed awards campaigners keep whiffing in the end.

Last year, the company’s best-picture hopes rested on “The Irishman.” It failed to convert even one of its 10 nominations into a win. In 2019, Netflix pushed “Roma.” It won three Oscars, including one for Alfonso Cuarón’s direction, but lost the big prize.

On Sunday, Netflix had two nominees, “Mank” and “The Trial of the Chicago 7.” But they came up short against Zhao’s “Nomadland,” an entry from Searchlight, a division of the Walt Disney Co.

Nothing usual about the broadcast

Soderbergh was not your usual Oscar producer, which is why he may have been the perfect choice for this very unusual year. He and his producing partners for the event, Stacey Sher and Jesse Collins, eschewed Zoom and implemented enough protocols to enable a mask-free environment for the nominees.

The ceremony has typically included performances of the five tunes nominated for best song. Not this year. Those were moved off the main stage and onto a preshow, which allowed them to be performed in their entirety.

This time, however, the academy decided to hand out two honorary Oscars during the primary show. (Since 2009, honorary statuettes have been awarded during a nontelevised banquet in the fall.) The nonprofit Motion Picture & Television Fund, which underwrites a nursing home and retirement village for aging and ailing “industry” people (actors, executives, choreographers, lighting technicians, camera operators), received one. The organization, founded in 1921 by stars like Mary Pickford and Charlie Chaplin, also provides a wide range of other services to Hollywood seniors.

The second went to Tyler Perry, who the academy cited as a “cultural influence extending far beyond his work as a filmmaker.” Perry, of course, started his entertainment career as a playwright. Since ending his popular, “Madea” film series in 2019, Perry has focused on making television shows like “Bruh,” “Sistahs” and “The Oval” for BET. He owns a studio in Atlanta.

The Dolby Theater, which holds more than 3,000 people and has been the home of the Academy Awards since 2001, was not the epicenter of the telecast. This year, with just the nominees and their guests in attendance, an Art Deco, Mission Revival train station in downtown Los Angeles served as the main venue.